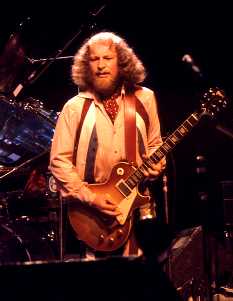 Martin was born in Birmingham, England on the 17th November, 1946. He studied at local Grammar schools, before enrolling on a degree course in Surveying and Architecture at college and university.

Leaving college to begin a musical career playing saxophone and flute, he joined a touring soul band who travelled throughout Germany and the UK, later backing such legendary US artists as Lee Dorsey, The Coasters and Ben E. King.

Barre first ran into Jethro Tull in 1968 when his band "Gethsemane" as it was then called, supported Tull at a concert at the Van Dyck Club in Plymouth, England.

Martin had by then graduated to electric guitar along with his other instruments, and must have made some favourable impression on the members of Tull since, when Mick Abrahams forfeited the guitar slot in December 1968, Martin successfully auditioned, being favoured over Tony Iommi, later of Black Sabbath, whose style was seen as less flexible than the more eclectic musical background which Martin brought to the group.

After a few shows in the UK to warm up both Martin and some new material, Tull joined Jimi Hendrix for some concerts in Scandinavia, and then on to the USA for the first time, early in 1969.

As the Tull success grew through album releases and concert tours Martin Barre developed his skills to encompass his broad interests in classical, jazz, pop and rock music, benefiting as he went from friendly acquaintances with other rock guitar luminaries of the day, such as Peter Green, Leslie West, Jimmy Page, etc.

In 1976, he met his future wife while arriving at Jackson City Airport, and in uncharacteristic fashion, did the "major Rock Star bit" by boldly offering her a ticket and backstage pass to the show that night. The young Julie Weems was sufficiently reassured by his gentlemanly and polite demeanour, to actually turn up and thus began an enduring 22 year relationship which now involves two daughters, a son, one dog and two cats.

Martin has recorded two solo albums in the last few years: "A Trick Of Memory" and "The Meeting", and runs his own commercial recording studio, "The Presshouse" in nearby Devon, England which plays host to many new and established bands who come to enjoy the creative tranquillity which has fuelled Martin's solo work.

His fondest memories of touring involve gigs with Hendrix, Zappa, Captain Beefheart, Chicago, Mountain and UK. Favourite Tull tracks include "Sossity, You're A Woman" and "Nothing To Say", and his favourite Tull album is 1984's "Under Wraps".

Martin Barre continues to record and tour with Jethro Tull.