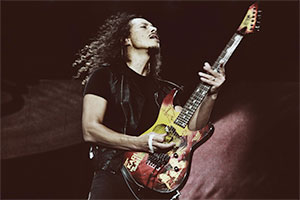 Kirk Hammett, never without a grin or a curious thought, is the true Bay Area band-member. Born in the East Bay town of El Sobrante (also the birthplace to one Les Claypool), he gained an interest in music from his brother Rick's extensive record collection, Jimi Hendrix, Led Zeppelin and UFO. It all led to him properly picking up the guitar when he was 15, his first being a wholly unglamorous Montgomery Ward catalog special accompanied by a shoe box with 4 inch speaker for an amp.

After picking up a 1978 Fender Stratocaster, Kirk experimented by mixing and matching guitar parts to find his perfect sound before falling for a 1974 Gibson Flying V. In a determined (and successful) effort to upgrade his equipment, Kirk even took a shift at Burger King to get the cash together for his first Marshall amp. Around that time, Kirk also co-founded Exodus with Paul Baloff, and the East Bay thrashers crossed paths with Metallica twice, in late '82 and early '83, as a support act.

In April 1983, Kirk received a phone call from Metallica in New York. They were in the process of firing guitarist Dave Mustaine and wanted Kirk to fly out and audition. Kirk got the money together for the flight, left California for the first time and arrived in the late afternoon to find three guys who were still waking up. Immediately he, and they, knew the fit was right despite the fact nobody ever formally invited him to join.

A keen student of his instrument even today, Hammett followed his first 'Kill 'Em All' tour by taking lessons from Joe Satriani, and embarked upon a passage of guitar self-education that took in jazz, blues and classical styles. Indeed, education has always been Kirk's answer to potential burnout. After the marathon 'Black' album tour ended in 1993, he immediately went to the City College of San Francisco where he took classes, something he credits as the reason behind his reinvention as a guitarist on the 'Load' and 'Re-load' albums.

Kirk continues to bring not only a dazzling array of lead guitar parts to Metallica's music but also some savage rifferey, having started sharing 6-string duties with James during the 'Load' era. He is happily married to Lani, and lives in San Francisco along with a large collection of old Hollywood movie memorabilia, his two dogs Darla and Hoku, plus cats.......Oh, and for the record, Kirk plays his guitar at least 361 days a year.