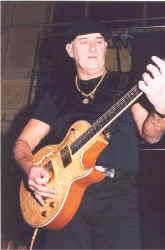 A musician of near-legendary prowess, Jan Akkerman for a time eclipsed Eric Clapton, Jimmy Page, and Jeff Beck among reader polls in England as the top guitarist in the world. Akkerman was born in Amsterdam, Holland, and showed his musical inclinations early, taking up the guitar while still in grade school. His taste and interests were extraordinarily wide-ranging, from pop-rock to classical, with room for blues, Latin, and other influences. He joined his first band, Johnny &The Cellar Rockers, in 1958, at age 11, which included his boyhood friend Pierre van der Linden, on drums.

Later on, the two were members of the Hunters, an instrumental group whose sound was heavily influenced by that of the Shadows. He acquired a special interest in the lute while on a visit to England during the mid-1960's, during which he saw a performance by legendary classical guitarist Julian Bream, whose repertory of medieval works also fascinated Akkerman. This interest, which broadened to embrace a fixation on medieval England and its countryside, later manifested itself in such works as "Elspeth of Nottingham" from Focus 3.

During the late 1960's, Akkerman, Van der Linden, bassist Bert Ruiter, and singer Kaz Lux formed Brainbox, who were good enough to get a recording contract with Parlophone Records. He was involved with an early incarnation of the group Focus, founded by conservatory-trained flautist Thijs Van Leer, but join until after that group had issued its unsuccessful debut album - he took Van der Linden with him from Brainbox and, with Van Leer and bassist Cyril Havermans (later succeeded by Ruiter) from the original Focus, formed a new group of that name. With Akkerman's virtuoso guitar work and arrangments coupled to Van Leer's classical influence (and his yodeling on their breakthrough hit, "Hocus Pocus"), the new group found a large international audience beginning in 1972, which transformed Akkerman into a superstar guitarist.

His solo career actually dated from 1968, though his attempt at a solo album, later titled Guitar For Sale - containing his covers of numbers such as "What'd I Day", "Ode To Billy Joe", and "Green Onions" - was so primitive by the standards of the time, that it was deemed unreleasable until Akkerman started topping reader surveys in the mid-1970's. Profile, released in 1972 after he'd begun making some headway with his reputation, also dated from 1969 and his days with Brainbox. Akkerman's first real solo album reflecting his music and interests at the time appeared in 1974, in the form of Tabernakel, which was recorded during the summer of that year at Atlantic Recording Studios in New York -- having finally acquired a medieval lute of his own, he taught himself to play it and the results comprise more than half of this LP, made up of authentic medieval music and originals composed in a medieval mode. It was certainly the most unusual record ever to feature the playing of Tim Bogart (bass) and Carmine Appice (drums), as well as soul drummer Ray Lucas.

After leaving Focus in 1976, Akkerman began releasing a stream of solo albums, which frequently embraced classical, jazz, and blues, and started leading his own bands. Much of his work during the 1980's wasn't released officially outside of Holland, but his periodic recordings with Van Leer, coupled with efforts to revive Focus with its two major stars, kept his name circulating in international music circles. The only problem that Akkerman faces derives from the sheer eclecticism of his work, which makes him very difficult to categorize - two different branches of Tower Records in the same city list him as a jazz and a rock artist, respectively, but one could just as easily make a claim for him as a classical artist.