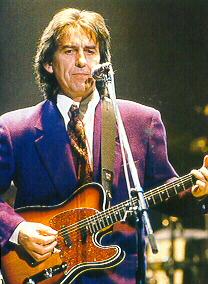 As lead guitarist for the Beatles, George Harrison provided the band with a lyrical style of playing in which every note mattered. Harrison was one of millions of young Britons inspired to take up the guitar by British skiffle king Lonnie Donegan's recording of "Rock Island Line." But he had more dedication than most, and with the encouragement of a slightly older school friend - Paul McCartney - he advanced quickly in his technique and command of the instrument.

Harrison developed his style and technique slowly and painstakingly over the several years, learning everything he could from the records of Carl Perkins, Duane Eddy, Chet Atkins, Buddy Holly, and Eddie Cochran. By age 15, he was allowed to sit in with the Quarry Men, the Liverpool group founded by John Lennon, of which McCartney was a member; by 16, he was a full-fledged member of the group.

The Beatles finally coalesced around Lennon, McCartney, Harrison, and drummer Ringo Starr in 1962, with Harrison established on lead guitar. The Beatlemania years, from 1963 through 1966, were a mixed blessing for Harrison. The Beatles' studio sound was generally characterized by very prominent rhythm guitar parts, and on many of the Beatles' early songs, Harrison's lead guitar was buried beneath the chiming chords of Lennon's instrument. Additionally, he was thwarted as a songwriter by the presence of Lennon and McCartney; the quality and proliferation of their output left very little room on the group's albums for songs by anyone else. Despite these problems, Harrison grew markedly as a musician between 1963 and 1966, writing a handful of good songs and one classic ("If I Needed Someone"), and also making his first acquaintance of the sitar, an Indian instrument whose sound fascinated him.

In 1966, Harrison finally seemed to find his voice with two of his songs on the Revolver album, "Taxman" and "Love You Too." In the wake of the group's decision to stop touring, Harrison's playing and songwriting grew exponentially. The period from 1968 onward was Harrison's richest with the Beatles. He displayed a smooth, elegant slide guitar technique that showed up on their last three albums; and he contributed two classic songs, "While My Guitar Gently Weeps" (solo guitar - Eric Clapton) and "Here Comes the Sun," along with "Something," which became the first Harrison song on the A-side of a Beatles single.

Although never known as a strong singer, Harrison's vocals were always distinctive, especially when placed in the right setting; for his first solo record following the group's 1970 breakup, All Things Must Pass, Harrison collaborated with producer Phil Spector, whose so-called "Wall of Sound" technique adapted well to Harrison's voice. All Things Must Pass and the accompanying single "My Sweet Lord" had the distinction of being the first solo recordings by any of the Beatles to top the charts following their breakup. Unfortunately, Harrison was later successfully sued by the publisher of the 1962 Chiffons hit "He's So Fine," which bore a striking resemblance to "My Sweet Lord."

Harrison followed All Things Must Pass with rock's first major charity event, The Concert for Bangladesh, which was staged as two shows at New York's Madison Square Garden in 1971 to help raise money for aid to that famine - ravaged nation. The second of the two all-star shows was released as a movie and a live triple album.

Harrison's next studio album, Living in the Material World, initially sold well, but its leaner, less opulent production lacked the majestic force of All Things Must Pass, and it lacked the earlier album's mass appeal. Subsequent Harrison albums from the 1970s into the '80s always had an audience, but - except for Somewhere in England (1981), released in the wake of the murder of John Lennon with the memorial song "All Those Years Ago" - none seemed terribly well-crafted or -executed. During this same period, Harrison embarked on a successful career as a movie producer with the founding of Handmade Films.

In 1987, Harrison made a return to the top of the charts with his album Cloud Nine, which featured his most inspired work in years, most notably a cover of an old Rudy Clark gospel number called "Got My Mind Set on You," which reached number one on the charts. In 1988, Harrison, Bob Dylan, Tom Petty, Jeff Lynne, and Roy Orbison formed the Traveling Wilburys, who released two very successful albums. It was also around this time that Harrison appeared with his former bandmate Ringo Starr, Dave Edmunds, Rosanne Cash, and the Stray Cats' Lee Rocker (who was born the year the Beatles made their first recordings) in a superb live-in-front-of-the-cameras rockabilly performance accompanying Harrison's one-time idol Carl Perkins; which was subsequently released on video cassette and laser disc.

All of this success heralded a short-lived re-emergence for the musician out of private life, resulting in a 1991 tour of Japan that yielded a live album (Live in Japan). Harrison had hated concertizing since the harrowing days of the Beatles' international career, and had done one poorly received concert tour in the mid-'70s; he seemed more comfortable in 1991, and the album performed moderately well, driven by the presence of his then-recent hits.

He withdrew into private life after that, devoting himself to his life with his second wife and their son, and only re-emerged before the public when necessary, such as defending the Beatles' copyrights in court cases.

In 1999, Harrison was assaulted in his home and seriously injured by a deranged fan, but he recovered and in 2000 he began work on remastering and expanding his classic All Things Must Pass album. The reissue of that album at the outset of 2001 heralded an unusually public publicity campaign by Harrison, who accompanied its re-release with an interview record that anticipated the eventual reissue of the rest of his catalog.

Harrison had been treated for throat cancer in the late '90s, but in 2001 it was revealed that he was suffering from an inoperable form of brain cancer. At the time of his death on November 29, 2001, The Concert for Bangladesh album had been announced for upgraded reissue in January of 2002, and a DVD of the film was in release internationally.