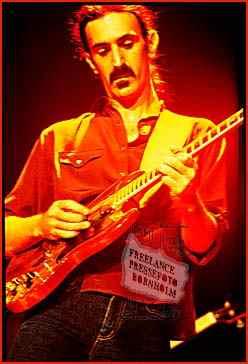 Frank Zappa was one of the most accomplished composers of the rock era; his music combines an understanding of and appreciation for such contemporary classical figures as Stravinsky, Stockhausen, and Varèse with an affection for late-'50s doo wop rock & roll and a facility for the guitar-heavy rock that dominated pop in the '70s. But Zappa was also a satirist whose reserves of scorn seemed bottomless and whose wicked sense of humor and absurdity have delighted his numerous fans, even when his lyrics crossed over the broadest bounds of taste. Finally, Zappa was perhaps the most prolific record-maker of his time, turning out massive amounts of music on his own Barking Pumpkin label and through distribution deals with Rykodisc and Rhino after long, unhappy associations with industry giants like Warner Brothers and the now-defunct MGM.

Zappa became interested in music early and pursued his studies in school, up through a six-month stint at Chaffey College in Alta Loma, CA. He scored a couple of low-budget films and used the money to buy a low-budget recording studio. In 1964, he joined a local band called the Soul Giants, which, over the course of the next two years, evolved into the Mothers, who played songs written by Zappa. The band was signed to the Verve division of MGM by producer Tom Wilson in 1966 and recorded its first album, a two-LP set called Freak Out!, which introduced Zappa's interests in both serious music and pop as well as his scathing wit. (Verve insisted on adding "of Invention" to the band's name.)

Subsequent albums extended the musical and lyrical themes of the debut, and they came frequently. Three albums, for example, hit the charts in 1968: We're Only in It for the Money, a Mothers album that made fun of hippies and Sgt. Pepper; Lumpy Gravy, a Zappa solo album recorded with an orchestra; and Cruising With Ruben & the Jets, on which the Mothers played neo-doo wop. Toward the end of the '60s, Zappa expanded the Mothers lineup, turning more toward instrumental jazz-rock, much of which displayed his technically accomplished guitar playing. But by the end of the decade, he had broken up the band.

In 1970, however, Zappa reassembled a new edition of the Mothers, featuring former Turtles lead singers Mark Volman and Howard Kaylan as frontmen. The lineup moved the group more in the direction of X-rated comedy, notably on the album Fillmore East: June 1971, but it was short-lived: during a performance at the Rainbow Theatre in London, Zappa was pushed from the stage by a demented fan and seriously injured.

While he recovered, Zappa released several albums, then he re-formed the Mothers with himself as lead singer and made pop/rock albums such as Over-nite Sensation that were among his best-selling records ever. By the end of the '70s, Zappa was recording on his own labels, distributed in some cases by the majors, and he had attracted a consistent cult following for both his humor and his complex music. (Zappa's band, in fact, became a training ground for high-quality rock musicians, much as Miles Davis' was for jazz players.)

In the '80s, Zappa gained the rights to his old albums and began to reissue them, at first on his own and then through the pioneering Rykodisc CD label. He wrote his autobiography and embarked on a world tour in 1988. That was the end of his live performing, except for such isolated appearances as one in Czechoslovakia at the invitation of its post-Communist president, Zappa fan Vaclav Havel. In late 1991, it was confirmed that Zappa was seriously ill with cancer. Nevertheless, his schedule of album releases continued to be rapid. Zappa died in December of 1993, with a number of posthumous releases to follow.