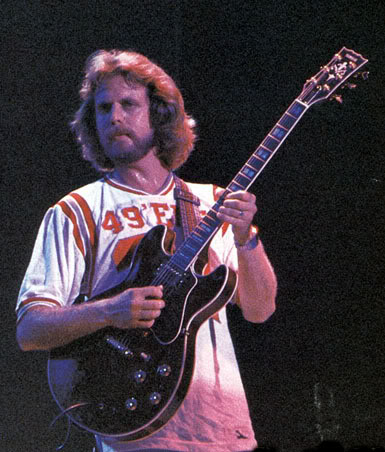 During the Eagles' most commercially successful period (the late '70s), the press seemed transfixed on Don Henley, Glenn Frey, Joe Walsh, and Timothy B. Schmit, rather than the mysterious man in the background, guitarist Don Felder. But in addition to the group's trademark vocal harmonies, it was Felder's guitar harmonies that proved to be an important ingredient to the Eagles' sound (not to mention composing all of the music to one of rock's all-time greatest tracks, "Hotel California," including its epic guitar solo).

Additionally, Felder was one of the group's longest-standing members (second only founders Henley and Frey), before his abrupt ousting from the Eagles in the early 21st century. Born on September 21, 1947 in Gainesville, Florida, Felder discovered rock n' roll via an Elvis Presley TV appearance on the Ed Sullivan Show, which led to Felder picking up the guitar by the age of 11. Throughout his teenage years, Felder played in various groups (including the Continentals, which at separate times, also featured Stephen Stills and future Eagles bandmate Bernie Leadon).

After the band split up, Felder relocated up to New York, where he appeared on an obscure self-titled debut by a group called Flow, in 1970. Although the group split up as well soonafter, Felder kept his chops up by playing with others, and in the process, mastered several different musical styles. Tired of the New York scene, Felder relocated once more, to Boston, where he worked steadily in a recording studio for two years - picking up pointers on how to make records via engineer work.

When old friend Leadon came through town with his new band, country-rockers the Eagles, Felder joined the group for an on stage jam session, and took Leadon's advice regarding relocating to California, where a vast amount of session work beckoned. Felder made the trip in 1972, and spent the next year recording and touring with folk singer/songwriter David Blue. Afterwards, Felder was invited to serve as a touring guitarist for Graham Nash, but when he was asked to join the Eagles, he accepted (even though he suspected the band wouldn't last for much longer, due to inter-band hostility).

Felder contributed guitar to such hit Eagles albums as 1974's On the Border and One of these Nights, but the band was still searching for the missing piece to their puzzle. The missing link turned out to be guitarist Joe Walsh, who replaced Leadon, and contributed to the Eagles' massive hit, 1976's Hotel California, which has gone on to sell a staggering 16 million copies in the U.S. alone.

After an oft-delayed follow-up was issued in 1979, the Long Run, and its ensuing supporting tour wrapped up (documented on 1980's Eagles Live), the Eagles announced they were splitting up in 1982. Felder subsequently contributed solo tracks to the motion picture soundtracks for Heavy Metal and Fast Times at Ridgemont High and even issued a star-studded solo full-length in 1983, Airborne (which included contributions from Kenny Loggins, Dave Mason, and Timothy B. Schmit, among others).

In the wake of the Eagles' split and his solo release, Felder kept himself busy by guesting on other artists' albums, including the Bee Gees' Living Eyes, Stevie Nicks' Bella Donna and Wild Heart, Diana Ross' Eaten Alive, Bob Seger's Distance, Joe Walsh's There Goes the Neighborhood and You Bought It, You Name It, plus Robin Zander's self-titled release. But for the better part of the late '80s/early '90s, Felder shied away from the music biz, while rumors of an impending full-on Eagles reunion tour began to circulate.

The rumors eventually proved to be fact in the spring of 1994, when the group reunited for an MTV concert taping (released the same year as Hell Freezes Over), featuring old tunes alongside a pair of new compositions. The group's ensuing tour proved to be a blockbuster success, but a rumored all-new studio album by the reunited group failed to materialize. The group reunited once more for a Los Angeles show on New Years Eve, 1999, but shortly after the show, Felder was surprisingly fired from the group. Felder then sued former bandmates Henley and Frey in February of 2001, claiming he was wrongly terminated. The case went to court in July of 2002. ~ Greg Prato