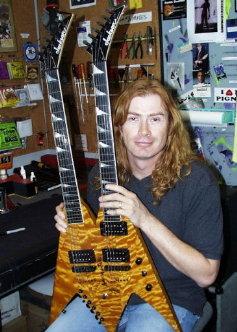 Although he never appeared on any of their albums, guitarist Dave Mustaine lent a major hand in creating Metallica's groundbreaking thrash metal sound. Born on September 13, 1961, in La Mesa, CA, Mustaine and his family had to move often while he was a youngster to escape the wrath of his alcoholic and violent father.

It was through his older sister that he was turned on to music (mostly the singer/songwriter folk sounds of Cat Stevens), but by his teenage years, Mustaine had become a major metal fan; teaching himself to play guitar while not learning from his father's mistakes, he began indulging heavily in alcohol and shortly thereafter, hard drugs. It was during his tenure as a drug dealer that he was turned on to the New Wave of British Heavy Metal (Iron Maiden, Saxon, Motörhead, Venom) from a "client" who would offer payment in the form of albums.

Living in the Los Angeles area by this time and inspired by this new heavy style, Mustaine set out to form a band patterned after the NWOBHM sound that would focus more on music than image (the complete opposite of what the entire glam metal scene of the Sunset Strip was doing at the time). Through a local paper ad, Mustaine hooked up with singer/guitarist James Hetfield, drummer Lars Ulrich, and bassist Ron McGovney - leading to the formation of Metallica.

Although the band's sound and approach would eventually influence countless other metal bands, Metallica wasn't succeeding in L.A. With McGovney not pulling his weight, the group welcomed new bassist Cliff Burton to the fold - but Burton would only join if the group relocated to San Francisco. With nothing to lose, the band made the trip, and instantly garnered a substantial following with their high energy live shows and a heavily circulated demo, No Life 'Til Leather. The demo landed a record deal with the independent Megaforce label, but the group would have to relocate yet again, this time to New York.

Shortly after arriving, Metallica booted Mustaine from the band, citing that his self-destructive ways were proving detrimental to the others.

Deeply depressed, Mustaine returned back home on a bus. It was during the nearly weeklong ride that Mustaine came up with the name and concept for his next band, Megadeth - the subject matter and lyrics would be more thought provoking than his previous band's, and the music would be even more intense and precise. Shortly after he returned home to California, Mustaine befriended a metal-loving/bass playing neighbor in his apartment, Dave Ellefson, who was the first to enlist in Mustaine's new outfit. Drummer Lee Rash and former-Slayer guitarist Kerry King also signed on and began playing out (with Mustaine eventually handling the vocal chores in addition to guitar).

By 1984, Rash was replaced by Gar Samuelson, while Chris Poland stepped in for King, who had returned back to Slayer, as Megadeth signed to Combat Records. Their debut, 1985's Killing Is My Business, created a buzz in the metal underground, but the buzz turned to a roar by the time of their major-label debut for Capitol a year later, Peace Sells...But Who's Buying, considered one of the greatest metal releases of all time, eventually reaching gold status.

Throughout the rest of the '80s, Mustaine's addictions grew larger and more dangerous as he and Ellefson were the only constant members amidst a revolving door of other hired guns. 1988's unfocused So Far So Good So What was followed two years later by Rust in Peace, a glorious return to form. It was perceived in the press that Mustaine was now finally "clean and sober," but this proved not to be case, as he continued to battle his demons throughout the '90s. Mustaine also continued to duke it out in the press with his former bandmates in Metallica, as he claimed to have written the majority of the music for their first few albums (to a certain degree, this proved to be true, as Mustaine earned songwriting credits for such early Metallica songs as "The Four Horsemen," "Jump in the Fire," "Phantom Lord," "Metal Militia," "Ride the Lightning," and "Call of Ktulu," among others).

Nevertheless, Megadeth racked up such further hit albums as 1992's Countdown to Extinction, 1994's Youthanasia, and 1997's Cryptic Writings. In addition to his Megadeth duties, Mustaine also appeared in the 1988 Penelope Spheeris-directed metal documentary Decline of Western Civilization II: The Metal Years, covered the Democratic National Convention for MTV in 1992, joined former Fear frontman Lee Ving for a one-off project dubbed MD.45 (their lone album was 1996's The Craving), and designed his own line of instruments for the Jackson guitar company.

After several near-death experiences, Mustaine cleaned up his act for good in the late-'90s, as Megadeth continued to tour and crank out further releases - 1999's experimental Risk and their first release for the Sanctuary label, 2001's The World Needs a Hero. The band (and to a greater degree, Mustaine) was the subject of a VH1 Behind the Music episode the same year, as well.