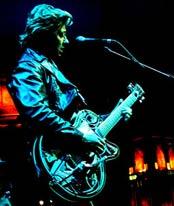 Former Stray Cat Brian Setzer was born in New York City and raised in Long Island. His first instrument, at age eight, was the euphonium, and he played the tuba-like instrument for ten years. He began having dreams of leading a big band with horns as a teen, but got sidetracked by punk. Initially, as a guitarist and songwriter, he took his inspiration from blues-rock bands like Led Zeppelin, although as a teen he'd take the train into New York to hang around the jazz clubs, sneaking into places like the Village Vanguard and the Village Gate. After seeing the Mel Lewis Orchestra, he had the idea of leading his own big band, but playing guitar, not clarinet or saxophone.

In the early '80s, Setzer formed the Stray Cats, a rockabilly band that took England by storm and then came back home to convert audiences in the U.S. The Stray Cats' U.S. breakthrough album was Built for Speed, which spurred three separate Top Ten hits, including "Stray Cat Strut," "Rumble in Brighton," and "Rock This Town."

On tour with the Stray Cats, Setzer practiced jazz chords and listened to the recordings of Gene Krupa, Benny Goodman and other big-band leaders; finally, after the group's demise and a largely unsuccessful turn as a solo roots-rocker, Setzer formed a 17-piece big band in Los Angeles for a series of club dates.

After cutting an album of cover material with the big band for a smaller label, Setzer jumped to Interscope Records, where he worked with legendary producer Phil Ramone as well as Clash co-founder Joe Strummer, with whom he collaborated on 1996's Guitar Slinger, an album blending jump blues and swing Texas blues. Dirty Boogie followed in 1998 and Vavoom! was released in 2000 and Ignition appeared the next spring.