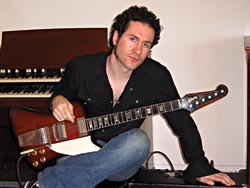 Blues Saraceno received his first record deal at the tender age of 16 with "Guitar for The Practicing Musician." The first record is called called "Never Look Back". He then recorded "Plaid" and "Hairpick" for them as well. All three were instrumental albums that sold well over 100,000 copies.

He went on to play with Michael Bolton, Taylor Dayne, Cher, and toured the world several times over with Jack Bruce and Ginger Baker of " Cream ". He recorded " Crack a Smile " with the band POISON their last album for Capitol Records.

He's done sessions with "Ziggy Marley" (Dragonfly) and "Melissa Etheridge" (Lucky), among others.

He has been working on many Television Shows for various networks as well as commercials both in the U.S and outside. He also has been producing and recording for Music Libraries and other artists.