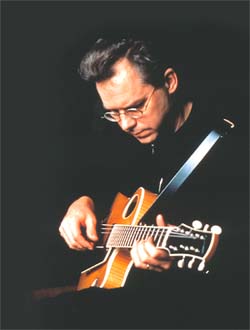 The defining characteristic of any given jazz musician is frequently his sound. The more control a player has over the nature of that sound, the more likely he is to project a distinctive musical personality. For example, a saxophonist has virtually unlimited physical control of the sound that comes through his horn, and therefore a wide range of tonal expression at his command - which partially explains the disproportionate number of saxophonists in the pantheon of great jazz musicians.

On the other hand, few electric guitarists inhabit that realm, in part because the typical jazz guitar sound differs little from player to player. In general, guitarists do not have the same degree of physical control. Without the use of signal processing - which jazz purists shun - they're mostly stuck with the generic sound that comes out of their amp. Hence, guitarists have historically tended to "sound" more or less the same.

Bill Frisell is a notable exception. Among jazz guitarists, Frisell is unique in his exploitation of variable timbre. Frisell's sound swells and breathes like a saxophonist's (interestingly, Frisell played clarinet as a child). In many ways his sound is reminiscent of a pedal steel guitar. And although his work is steeped in jazz, Frisell is a man of catholic tastes. His music includes characteristics of rock, country, and bluegrass, among various other styles. Such liberality explains his willingness to expand his tonal palette beyond that of the typical jazz guitarist. Where so many conventional jazz guitarists define themselves by how many notes they can play, Frisell has carved a niche by virtue of his sound. His ability as an original, lyrical player of melody combines with a unique (if much imitated) sound to make him one of the most singular musicians of his generation.

Born in Baltimore, Frisell grew up in Denver, CO. He began playing the clarinet in the fourth grade. Frisell took up guitar a few years later for his personal amusement. He continued with the clarinet, playing in school concert and marching bands. Frisell briefly considered playing classical clarinet professionally. He played guitar in rock and R&B bands as a teenager (high school classmates included Philip Bailey, Andrew Woolfork, and Larry Dunn, future members of the funk group Earth, Wind, and Fire). He discovered jazz in the music of Wes Montgomery, and began to study the music. Dale Bruning, a Denver-based guitarist and educator, fed his fascination with jazz. Frisell decided to make guitar his primary instrument. After briefly attending the University of Northern Colorado, he moved to Boston in 1971 to attend the Berklee School of Music.

There he studied with Michael Gibbs and John Damian. While at Berklee, Frisell connected with other like-minded players (Pat Metheny was a classmate). He also studied with Jim Hall, who became an important influence, especially in terms of harmony. In the mid-'70s, Frisell began moving away from pure bebop and began fusing jazz with his other musical interests. At about this time he began developing his atmospheric, quasi-mictrotonal style. He discovered that, by using a guitar with a flexible neck, he could manipulate the instrument's intonation. A combination of experimental techniques and signal processors like delay and reverb gave Frisell a sound unlike any other guitarist. In the late '70s he traveled to Belgium.

There he met Manfred Eicher, the founder of ECM Records. Beginning in the early '80s, Frisell recorded prolifically for the label, as leader and sideman with such musicians as Paul Motian and Jan Garbarek. He continued with the label throughout the decade, earning a reputation as ECM's "house guitarist." Frisell became much acclaimed by critics for his sophisticated yet accessible work. Frisell moved to New York in the '80s, where he worked with many of the most creative musicians active on the city's "downtown" jazz scene. In the '80s and '90s he would record and perform with a huge variety of artists, not all of them jazz musicians.

Collaborators would include rock and pop musicians (drummer Ginger Baker, singers Marianne Faithfull and Elvis Costello), experimental jazz musicians (saxophonist/composers John Zorn and Tim Berne), and at least one classical composer (Gavin Bryars). Frisell composed soundtracks for the silent films of Buster Keaton. His 1996 album Quartet won the Deutsche Schallplattenpreis, the German equivalent of the Grammy. Frisell became an annual winner of various magazine polls for his solo work and recordings. By the end of the '90s, Frisell was one of the most well-known jazz musicians in the world, with an audience and an aesthetic that transcended the boundaries of any given style. It should be mentioned that, while Frisell is best known for his somewhat "ambient" guitar technique, he is a swinging, harmonically fluent jazz player when the occasion warrants. Frisell moved to Seattle, WA, in 1989, where he lives as of this writing.