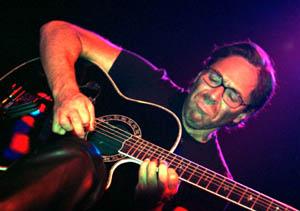 Guitarist Al DiMeola first rose to prominence as a blazing jazz fusion player before his playing matured and he began to conquer other styles, such as acoustic Latin music.

Born on July 22, 1954, in Jersey City, NJ, DiMeola briefly studied at the Berklee School of Music in Boston during the early '70s before accepting a job replacing guitarist Bill Connors in fusion trailblazers Return to Forever (a group that included such monster instrumentalists as keyboardist Chick Corea and bassist Stanley Clarke ) in 1974. It was with DiMeola that Return to Forever enjoyed their greatest commercialsuccess, as such releases as 1974's Where Have I Known Before, 1975's No Mystery, and 1976's Romantic Warrior cracked the U.S. Top 40 before DiMeola jumped ship to launch a solo career.

What followed remains some of the finest jazz fusion guitar-based recordings ever: 1976's Land of the Midnight Sun, 1977's Elegant Gypsy (which would eventually earn gold-certification in the U.S.), and Casino, plus 1979's Splendido Hotel, before uniting with fellow guitar greats John McLaughlin and Paco de Lucía for 1980's Friday Night in San Francisco. Throughout the '80s and '90s, DiMeola racked up numerous accolades (including earning yearly top honors in Guitar Player Magazine polls), kept on issuing solo releases on a regular basis, and played with others, including releases by Stomu Yamash'ta , Paul Simon, Stanley Jordan, and David Matthews, as well as further work with such former bandmates as Corea, Clarke, de Lucía, and McLaughlin. During the '90s, DiMeola turned his back almost entirely on fusion to concentrate more on acoustic-based world music, as evidenced by such releases as World Sinfonia, DiMeola Plays Piazzolla, and Heart of the Immigrants, among others.