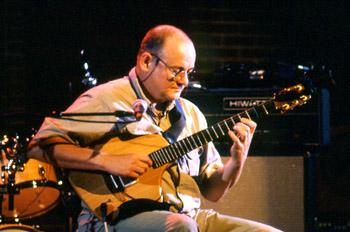 East London-born Adrian Legg first learned to play the oboe as a youngster and then made a fateful switch to guitar during adolescence. Since then, he has established his reputation as a unique and highly technical fingerstyle guitarist with shades of classical, jazz, folk, country, and rock coloring his work. Though he has released several of his own studio albums since the late '70s - many of which have topped year-end reader's polls for Guitarist and Guitar Player magazines - he has thrived as a live performer, whether appearing solo or with a spectrum of artists that has ranged from Nanci Griffith to Joe Satriani.

Legg has also been responsible for a number of instructional videos and books, and he has been a regular presence on National Public Radio's All Things Considered program. Guitar Bones, his first album for Steve Vai's Favored Nations Acoustic label, was released in early 2003.